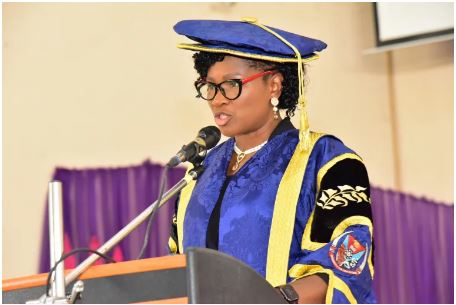 Prof. Oladiji, is the first female Vice Chancellor of the 40 year old institution, opened out her agenda during her inauguration as the eighth Vice Chancellor on Tuesday May 24, 2022. In her inaugural speech, she said “my major area of focus will be deepening of research, enhancement of students’ experience on campus; Expansion of the University – New academic programmes and infrastructural development; positively impacting the host community. Prioritizing staff and students’ welfare, Intensification of capacity building and staff development; Engendering peace, security, and stability and Improvement of Internally Generated Revenue.”

She stressed that the areas of focus may appear a difficult task, but she was confident that with the support of all stakeholders, “we can meet our target and even surpass it. I therefore earnestly plead that we all stay together, work together so we can celebrate success together.” She said her ultimate aim is to deliver a fully rebranded FUTA at the end of her five year tenure.

Prof. Adenike Oladiji saluted the tenacity of the Governing Council led by the Pro-chancellor , Dr Godknows Igali, for the painstaking effort that culminated into her  appointment as the Vice Chancellor saying she would not let the Council and the  University down.

She also acknowledged effort of the immediate past Vice Chancellor, in person of Prof. Joseph Fuwape, former Vice Chancellors , Principal Officers, Professors and other members of Senate, Staff and Students for their immense contributions that has ensured FUTA stands tall among other Universities. She described her emergence as divine, Prof. Oladiji  asked her co –contestants to join her in building and developing the FUTA brand.  Prof. Oladiji ,who said she is in the position to serve FUTA and humanity , pledged her undivided loyalty, commitment, and dedication to the progress of the Federal University of Technology, Akure.

In her words: “I shall faithfully and dutifully protect the law and Statute of the University and implement Council directives. I will accord due respect and honour to all the members of Council; extend courtesies to the Principal Officers, members of Senate and other statutory bodies of the University. I shall uphold high ethical standards in my relationship with all and sundries through a sheer display of courage, fairness, integrity, transparency, professionalism and exemplary leadership.”

The Pro Chancellor and Chairman Governing Council, Ambassador Igali in his address said Prof. Oladiji’s assumption of office ,”is the dawn of a new era in the life of the Institution. With   the promise of being FUTA’s golden age of accomplishment and ascendancy.” Amb. Igali who admitted that the task of selecting the Vice Chancellor was tasking, said the Council ensured level playing ground , fairness and integrity all thorough.  “I can assure you  with every sense of responsibility that the process that produced Prof.  Oladiji as the new Vice Chancellor of this University was methodical, thorough and transparent,” Igali said.

Dr. Igali urged the new Vice Chancellor to hit the ground running so as to sustain the legacy of excellence FUTA is known for. His words, “as Vice Chancellor and Chief Executive/Academic Officer of the University, the task before you is quite enormous. You, therefore, need to hit the ground running and work assiduously to not only sustain, but improve upon the current rating of the University. You need to provide exemplary leadership and bring harmony among the various sectors of the University. You will have to surpass the achievements of your predecessors in terms of academic and infrastructural development. You must be able to bring your managerial abilities to the fore to harness available resources to achieve breakthroughs for the University on all fronts.”

In his valedictory Speech, the immediate past Vice Chancellor, Professor Joseph Fuwape said stepping forward to take the reins of leadership in any University is a decision that requires quite some boldness, convictions and self-belief. He added that though he took over during a period of local crisis, God enabled him and his team to apply wisdom and understanding to resolve issues which culminated into peaceful atmosphere his tenure enjoyed.

He gave glory to the Lord for enabling him to establish the College of Health Sciences with students already admitted into the programme. He also expressed his delight in increasing the number of Schools and for all scientific breakthrough, grants, trophies and awards won by staff and students in his five years in office. Professor Fuwape appreciated the support, encouragement and reliability he enjoyed from the Council Chairman and other members, including the management team, staff and students while leading the university. He urged all to extend  hand of fellowship to his successor, Professor Adenike Oladiji and wish her a peaceful and successful tenure.

The Registrar, Mr. Richard Arifalo also congratulated the Council Chairman, Dr. Igali and the selection team over the appointment of a new Vice Chancellor and also congratulated Professor Fuwape for successful completion of his tenure. He expressed optimism that Professor Oladiji would take FUTA to greater heights.