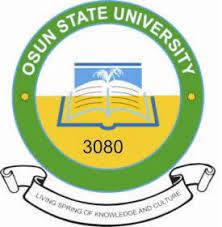 Osun State University Has Resumed For The Second Semester Of The 2021/2022 Academic Session. The resumption, which is in line with the approved academic calendar, took effect from Monday, 16th May, 2022.

Therefore, academic work resumed across campuses with teaching and allied activities immediately after a 3-week semester break. In a special release to the University and general public, the Vice-Chancellor, Professor Odunayo Clement Adebayo, welcomed students back to Campus and assured them of the University’s commitment to ensuring a stable academic calendar.

The resumption is occurring amidst the strike of the Academic Staff Union of Universities (ASUU), which has paralyzed academic activities for more than three months in Nigeria’s public universities.

The Vice-chancellor noted that in the last five years, UNIOSUN remains the only public University in Nigeria that has graduated students consistently for both the four and five years degree programmes without interruption of any kind. According to the Vice-Chancellor, this feat is alien to the public University system in today’s Nigeria, where staff labour union strikes have turned the academic calendars of universities upside down.

The Vice-Chancellor further reassured all students, parents/guardians, and other stakeholders that the University, as an entity governed by laws, regulations, and conventions anchored on global best practices, is committed to the stability of the academic calendar. Hence, there is no reason for alarm about any disruptions that could affect the smooth running of the University’s academic calendar.

The Vice-Chancellor further noted in the release that lectures had commenced for students across the University’s campuses. He also urged all students to continue committing themselves to their academics as that was the only way through which they could project their learning experiences and justify their parents continued investment in their future.

Lastly, Professor Adebooye commended the Academic Staff Union of Universities (ASUU), Non-Academic Staff Union (NASU), Senior Staff Association of Nigerian Universities (SSANU) and National Association of Academic Technologists (NAAT) branches of UNIOSUN for their diligence and commitment to continued service to the University and for ensuring harmonious labour relationship and convivial environment in the University.